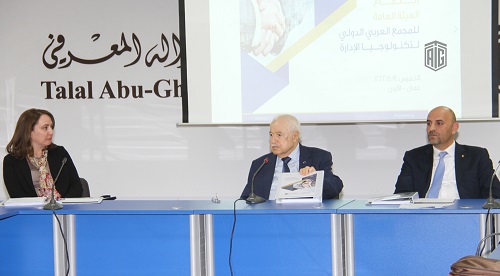 The meeting reviewed the Society’s past year activities and achievements, which focused on strengthening cooperation with various institutions with the aim of fulfilling the numerous digital transformation needs of local, regional and global communities.

In his keynote address, Dr. Abu-Ghazaleh affirmed the significance of cooperation with the League of the Arab States through initiatives and projects, particularly in the field of digitizing the Arab Parliaments and digital transformation, underlining the need for cooperating with the League’s General Secretariat and its affiliated organizations towards knowledge development, elimination of digital illiteracy and promotion of Artificial Intelligence (AI) programs.

In his capacity as Founder and Chairman of Talal Abu-Ghazaleh Global (TAG.Global), Dr. Abu-Ghazaleh called for utilizing the professional technologies and expertise at TAG.Global, the largest global organization for professional and education services operating through more than 100 offices all over the world.

The meeting was attended by anumber of the Society members including its Vice-President, former Minister of Industry, Trade and Supply, Eng. Mrs. Maha Ali, and AIMICT member and former Minister of Public Sector Development, Ms. Yasera Ghosheh, in addition to the Chairman of the Board of Directors of INTAJ Association, Mr. Eid Amjad Al-Sweis, along with other directors and heads of local companies and institutions.

Meanwhile, a committee from the participants was formed to submit suggestions concerning comprehensive digital transformation at public and private institutions in Jordan to the concerned authorities.

For his part, the AIMICT Director, Eng. Ashraf El Husseini, reviewed the Society’s 2021 annual report, which included the past year’sactivities; that build on the Society’s previous accomplishments, to place the Society at the top of international professional organizations and institutions working in this field, and to realize the objectives it was basically established for.

The Arab International Society for Management Technology (AIMICT) was established as a non-profit organization in 1989, in New York, in the United States, and it was officially registered in Amman in 1990 under the name of the "Arab Management Society”. As managers and businessmen were quick to realize the importance and the outcomes of their role in serving business communities in their countries, the idea of establishing such a society had emerged. In 2015, the name of the organization was amended to: "The Arab International Society for Management Technology" (AIMICT), to keep pace with modern global technological developments in various sectors and to help establish and create knowledge-based management.