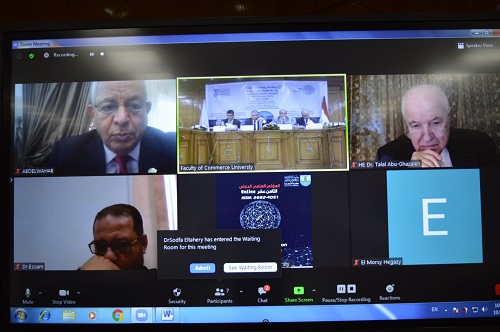 During the conference, Dr. Abu-Ghazaleh criticized the backward state of digitalization in the Arab region that would bring them back to the Stone Age,suggesting rescue tools atop of which is continuous attempts to improve digitalization regardless of any existing obstacles.

He also indicated that we should embrace the Fourth Industrial Revolution or the so-called ‘Digital Revolution’, "since we are already on the threshold of a historical stage that is pushing us toward digitalization". According to Dr. Abu-Ghazaleh teaching digitalization should start from primary and secondary education so that university students would be well prepared to graduate ascreators and inventors; an approach currently implemented at Talal Abu-Ghazaleh University College for Innovation (TAGUCI) whose unique vision is based on graduating inventors.

Regarding other rescue methods of the lagging state of digitalization in the Arab region, Dr. Abu-Ghazaleh believes that Arabs should fully understand that the world will indefinitely live with the ‘digital revolution’, taking into account that technology moves forward with or without us.

“For that reason, we need to educate children and guide them toward the useful science that is called the ‘Science of Modern Technology’ and provide whatever is needed to ensure their effective embracing of digitalization.