Abu-Ghazaleh: TAG.Global’s Ambition is to Become the Top Global Organization as Initially Planned

AMMAN - HE Dr. Talal Abu-Ghazaleh, founder and chairman of Talal Abu-Ghazaleh Global (TAG.Global), met all TAG.Global’s employees from more than 100 offices around the world, through Microsoft Team App, tackling the latest development in the Organization and the aspirations it seeks to achieve. 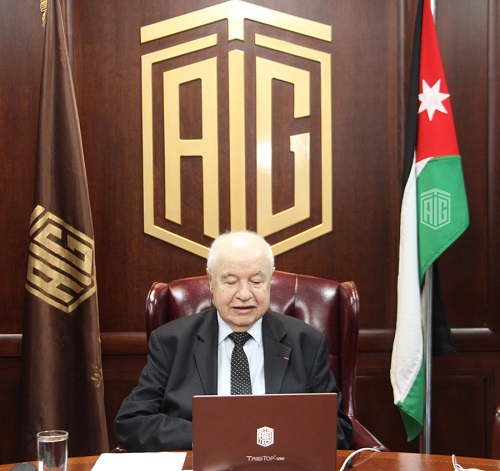 At the beginning of the meeting, Dr. Abu-Ghazaleh expressed his pride in all TAG.Global’s employees as well as their achievements, affirming his strong relation with each one of them and describing it as a family relationship that bonds a father with his family members.

Despite the current global economic situation caused by the spread of Coronavirus (COVID-19) pandemic, Dr. Abu-Ghazaleh affirmed that no one of TAG.Global’s employees has been laid off during the crisis. Furthermore; they received their full monthly salaries without any exception.

Dr. Abu-Ghazaleh also stated that TAG.Global had never stopped its operations, not even for a one single day during the pandemic, due to its state of readiness and its ability to keep abreast of the latest technology, He pointed out that TAG.Global has been always committed, since its establishment in 1972, to fulfill its obligations and contracts with its clients thanks to its employees sincere dedication.

During the meeting, Dr. Abu-Ghazaleh focused on TAG.Global’s policy in building and developing its employees’ skills and capacities especially in the field of languages, underlining the importance of learning the two basic languages: English and computer languages, in addition to the mother tongue (Arabic) to facilitate their digital access to knowledge resources. Moreover, Dr. Abu-Ghazaleh called on all his employees to benefit from the diplomas and courses remotely by Talal Abu-Ghazaleh Academy (TAG-Academy) through advanced technologies.

According to Dr. Talal Abu-Ghazaleh, TAG.Global is an evident proof of the excellence, the success and the ability to conquer the impossible when it made a major shift in its services. TAG.Global established Talal Abu-Ghazaleh for Technologies (TAGTech) company back in August to specialize in designing and manufacturing technical devices including laptops and tablets with high-specs through its factory in China and is currently establishing its first factory in the Arab region, precisely in Jordan.

Dr. Abu-Ghazaleh also asserted that TAG.Global’s ambition is not limited to producing, manufacturing and designing technological products by Arab experts and professionals. Rather, the aim is to become the top organization in providing different services worldwide, noting that this objective has been pursued since TAG.Global’s establishment in 1972.

Dr. Abu-Ghazaleh concluded the meeting saying that ‘success is a decision, and you are alone capable of taking such a decision. He ended by answering questions and inquiries submitted by the employees.