Home » News » Abu-Ghazaleh: the US is entering Two Critical Stages

Abu-Ghazaleh: the US is entering Two Critical Stages

AMMAN – Well-known Arab economist HE Dr. Talal Abu-Ghazaleh, founder and chairman of Talal Abu-Ghazaleh Global (TAG.Global), said the United States is going through critical stages in view of the US presidential elections and the refusal of President Donald Trump to acknowledge the victory of his rival President–elect Joe Biden. 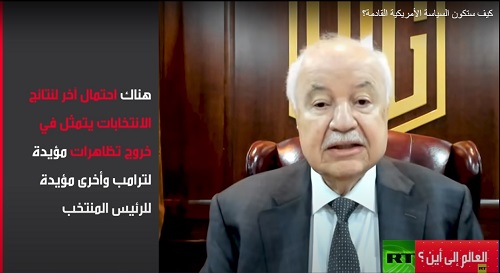 In a new episode of the “World to Where?” weekly program on Russia Today (RT) Channel, Dr. Abu-Ghazaleh stated that the US will pass through two stages, the first precedes January 20, 2021, and the second will be after that date which marks the end of Trump’s presidency.

He explained that the first stage that started already and will last until January 20, would witness legal disputes regarding the election results, noting that the dispute might end up with the Supreme Courts or the US Congress.

Concerning the second stage, post January 20, Dr. Abu-Ghazaleh expressed fears that protests and clashes over ballot result might erupt in light of the refusal of Trump to concede election loss to Biden.

He further noted that the “US President Trump is known for his personality that can’t admit defeat,” adding that Trump also said that the election result will only be announced by the State’s Supreme Court not the media outlets in the country.

Dr. Abu-Ghazaleh expected that the US in the meantime will be deeply engaged in its numerous internal issues, saying that in addition to the election crisis, there is the coronavirus (COVID-19) pandemic, where the number of people contractingthe virus is rapidly increasing in light of protests and demonstrations. That is in addition to the ongoing economic difficulties.

On the foreign policy front, Dr. Abu-Ghazaleh expected that Trump will devote his time to key domestic challenges and affairs and leave foreign policy to his Minister of State Mike Pompeo to handle foreign policy with America’s strategic and strong allies all over the world including Israel in the Middle East. For that reason Pompeohas already embarked on his visit to the region Dr. Abu Ghazaleh said.