AMMAN – The Arab Federation for Libraries & Information “AFLI” hosted HE Dr. Talal Abu-Ghazaleh, founder and chairman of Talal Abu-Ghazaleh Global (TAG.Global), in a panel session on the ‘Role of Information Institutions and their Services in Supporting the Shift towards Knowledge-Based Economy’. 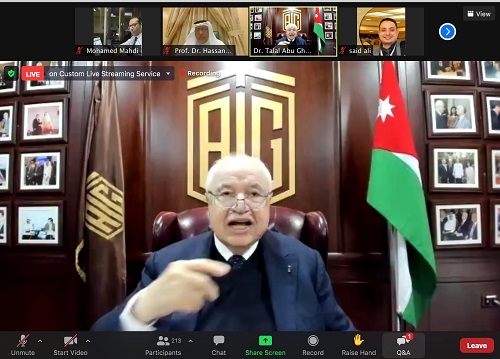 During the session, AFLI President, HE Dr. Hassan El Sereihy, expressed the Federation’s pride and gratitude for hosting Dr. Abu-Ghazaleh and the role he plays in serving institutions and societies, praising Dr. Abu-Ghazaleh’s career and his education journey that he devoted for the service of local, regional and global communities.

Dr. Abu-Ghazaleh stressed the importance of databases that form a point of strength for institutions, pointing out that TAG.Global has been always keen on developing its databases that include various fields of expertise.

He also emphasized that TAG.Global is the only organization in the world that owns Intellectual Property Rights (IPRs) registration database, affirming that this is one of the main factors that made it the World's Leading IP Firm.

Dr. Abu-Ghazaleh added that TAG.Global seeks to increase the available data on digital cyberspace, especially in ‘Arabic content’, through establishing an accurate, documented and thorough digital information database under the name Talal Abu-Ghazaleh Electronic Arabic Encyclopedia (TAGEPEDIA), noting that it currently documents over one million entries so far, and it aims to reach two million entries by the end of this year.

For TAG.Global’s efforts in Arab digital transformation process, Dr. Abu-Ghazaleh referred to the memorandum of understanding signed by Talal Abu-Ghazaleh Information Technology International (TAGITI); one of TAG.Global firms with the Arab Information & Communication Technologies Organization (AICTO)/League of the Arab States, to cooperate through TAG.Global’s experts who would offer their services to make a paradigm shift in the Arab countries in the field of digital transformation, and help implement AICTO’s strategic plans.

For the importance of digital transformation tools, Dr. Abu-Ghazaleh said: “We have established Talal Abu-Ghazaleh for Technology (TAGTech) to become one of the most advanced companies in the production of information technology tools which has so far produced a series of 15 technological devices including laptops, tablets and smartphones at high-specs and competitive prices in the Arab region.”

It is worth mentioning that the Arab Federation for Libraries & Information (AFLI) was established in Qairawan, in the Republic of Tunisia, as an institution that gathers Arab libraries and librarians.