BEIRUT – HE Dr. Talal Abu-Ghazaleh, founder and chairman of Talal Abu-Ghazaleh Global (TAG.Global), has signed a Memorandum of Understanding (MoU) with the Lebanese Minister of Labor, HE Mr. Mustafa Bayram to implement the digital transformation plan in Lebanon. 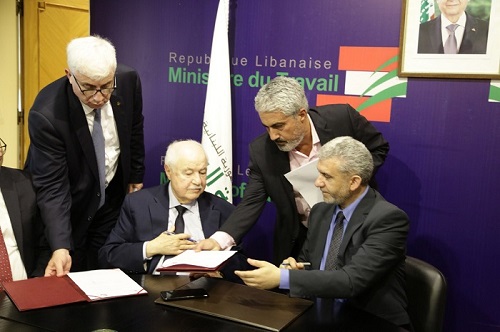 In this context, the two parties will collaborate in all digital transformation services as well as those related to e-archiving and indexing, automation, and the electronic structuring of the Ministry's internal and external working procedures. The agreement also covers raising awareness on the use of ICT, e-solutions, methods of securing files and information security, software solutions, and ERP systems as well as renewable energy consulting.

According to the signed memorandum, TAG.Global will prepare a study of the Ministry's capacity-building needs in IT and Internet skills, in addition to contributing to the development of new programs that will meet the ministry’s needs and requirements.

It was also agreed to cooperate in conducting specialized economic feasibility studies and tenders as well as making use of the consultants’ expertise of the two parties.
In a joint press conference, Dr. Abu-Ghazaleh praised the significant role Minister Bayram plays in developing the Ministry’s work and digitizing its services for the benefit of the country and its citizens.

Dr. Abu-Ghazaleh recalled his displacement as a refugee in 1948 from Palestine to the town of Ghazieh in South Lebanon, where he was raised and earned his education studied in Lebanese schools and universities; the country from which he moved to become a global personality, chairing many UN task forces particularly the UN Global Alliance for ICT for Development; that developed a global policy for the use of technology.

Furthermore, Dr. Abu-Ghazaleh stressed that his life journey was a series of challenges and problems which he considered a blessingto reach what he has accomplished since.

Encouraging optimism and positive thoughts, Dr. Abu-Ghazaleh said that ‘what Lebanon is currently experiencing is not difficult circumstances, but a blessing, since hard times ultimately create strong men’.
For his part, Minister Bayram said that the MoU is an implementation of the digital transformation plan drawn up by many volunteering experts from inside and outside the Ministry, who joined forces at record time without posing any financial burdens onthe country. He pointed out that the memorandum’s terms were finalized in less than 17 days and it was quickly approved by the Council of Ministers.

Mr. Bayram added that the importance of this plan lies in the fact that it is a strategic plan for the ministry’s sustainability saying: “Our plan concentrates on sustainability, as it covers the coming three years of the Ministry's ambitious plan for the first time. It includes digital transformation, solar power, electronic transactions, and training that meets business and market needs and requirements.”

Minister Bayram further affirmed: "we have the authority, power and hope to lead further development to deliver good services to the Lebanese community and citizens". He referred to the Ministry’s recently launched first-of-its-kind initiative in Lebanon to involve young people in decision-making under the slogan ‘Give me an idea and participate in the official decision-making’. He added that such an initiative aims to motivate the youth and talented people and to promote participation in decision-making so that all Lebanon’s citizens would feel and become responsible citizens in their country.

The Minister commended the role and the initiatives of Dr. Abu Ghazaleh affirming that "the interest of HE Dr. Abu-Ghazaleh, the great world business icon, in this area gave us confidence, to sign this memorandum, which will be based on the provision of informatics, digital transformation and training needs". He concluded by expressing hopes that signing the MoU will be the starting point for further cooperation and development by staying committed to appropriate implementation, good governance, and transparency, the Minister concluded.