AMMAN – HE Dr. Talal Abu-Ghazaleh, founder and chairman of Talal Abu-Ghazaleh Global (TAG.Global), visited the newly-established Talal Abu-Ghazaleh for Technology (TAGTech) factory at the Jordan Free and Development Zones Group (JFDZG) in the Queen Alia International Airport area. The visit was planned to check on the ground the factory facilities and production lines that are ready for manufacturing, as well as the warehouses. 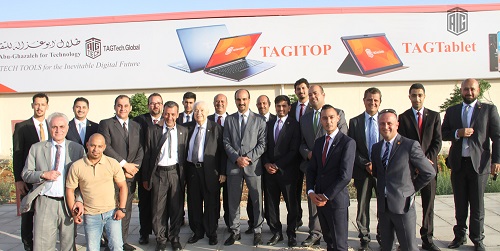 TAGTech is specialized in producing and manufacturing high-tec laptops, tablets, smartphones and other devices characterized by their high specifications at affordable prices for all.

During the tour, Dr. Abu-Ghazaleh expressed his pride in the rapid execution and high quality of the factory construction in record time, stating that the credit goes to the Free Zone facilities provided to investors that include equipment, licensing and construction procedures.

Dr. Abu-Ghazaleh explained while there that the idea of establishing the TAGTech factory in Jordan comes in response to the vision of HM King Abdullah II to pay considerable attention to technology and its tools, referring to Mis Majesty’s keennessthat Jordan should embrace the technological developments and to employ them in serving Jordan and developing people’s performance.

Additionally, Dr. Abu-Ghazaleh stated that the TAGTech factory in Jordan as well as the one in Egypt; which was established in partnership with the Arab Organization for Industrialization, are considered the first of their kind in the region and its surroundings. He proudly added that the two factories compete withglobal factories in East Asia and America in terms of their production capacity.

It is worth mentioning that the new TAGTech factory will provide technological job opportunities for Jordanians and will contribute to qualifying Jordanian workforce in a specialized technological industry. The manufacturing process at the factory will be conducted through three production lines; two assembly lines and one packaging line with a production volume that cover the needs regionally and globally offering technological devices manufactured and produced by TAGTech’s Jordanian and Arab expertise.