CAIRO – The Egyptian Al Ahram Press Establishment has organized a ceremony at its Panorama Hall to receive HE Dr. Talal Abu-Ghazaleh, the world-known economist, founder and chairman of Talal Abu-Ghazaleh Global (TAG.Global), forsigning a Memorandum of Understanding (MoU) between the two institutions. 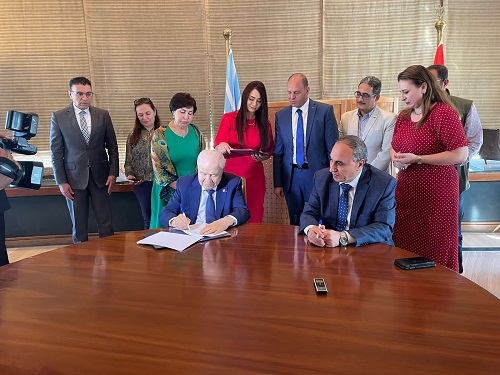 During the event, Dr. Abu-Ghazaleh expressed his pleasure for visiting the Press Establishment, with which he maintains no less than four decades of professional relations. He reminded that several programs have been carried out by TAG.Global for Al Ahram Management & Computer Center – (AMAC). He also referred to his special bonds of friendship with the lateMohamed Hassanein Heikal, who was the editor-in-chief of Al-Ahram newspaper for 17 years.

Further, Dr. Abu-Ghazaleh commended the important role Al Ahram Establishment plays in advocating national issues, expressing TAG.Global’s full readiness to cooperate with the Establishment in protecting Al Ahram's intellectual rights, as well as in preserving its archive by using modern e-archiving systems. Such collaboration is expected to be conducted through a special agreement between the concerned teams ina mutually agreedmechanism in accordance with the Establishment’s needs and requirements.

Dr. Abu-Ghazaleh highly praised the signing of MoU that will cover multiple areas such as training, education, digital transformation and media. He also welcomed Al Ahram’s request for establishing a branch of Talal Abu-Ghazaleh University College for Innovation (TAGUCI) at Al-Ahram Canadian University.

During the event, Dr. Abu-Ghazaleh reiterated his belief that the Egyptian economy will advance to the 6th place globally by 2030.

For his part, Chairman of the Al-Ahram Establishment, Mr. Abdul Mohsen Salama, welcomed Dr. Abu-Ghazaleh’s visit to Al Ahram, saying; “We are very proud of Dr. Abu-Ghazaleh’s presence at Al Ahram’s headquarters, recognized as one of the most influential business leadersand an Arab leader of vision.” He also expressed the Establishment’s eagerness to build a partnership with TAG.Global especially in the field of Intellectual Property Rights (IPRs) protection and safeguarding the Establishment’s historical archive.

Mr. Salama further affirmed Al Ahram’s keenness on cooperating with TAG.Global, pointing out that ‘Al Ahram-Canadian University includes nine faculties, and we welcome the establishment of a TAGUCI branch at the premises of the University.’

Meanwhile, Al Ahram Economic Magazine Editor in Chief, Mr. Sherif Abdel-Baki, expressed his admiration for Dr. Talal Abu-Ghazaleh’s accomplishments, and he highly underlined the significance of establishingcooperation with TAG.Global in the areas of innovation and digital transformation.

At the end of the meeting, a cooperation protocol was signed by Dr. Abu-Ghazaleh and CEO of Al Ahram Mr. Salama in the presence of representatives of senior management of Al Ahram Establishment and TAG.Global.